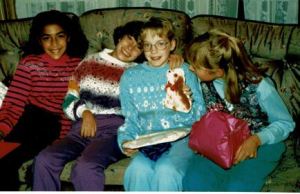 Melanie second from the left at age 10

If there is a movement afoot to build more inclusive and welcoming communities, then our family is a pioneering founder of that movement. Our journey began in 1979, when our daughter Melanie was born 10 weeks premature and developed cerebral palsy. For 38 years our focus has been on trying to get Melanie included. It was called integration at first. I remember the days when we asked people to “tolerate” persons with disabilities.  Melanie has been petted like a puppy, had her cheeks tweeked, referred to as “she” and “her” instead of by name. At one time Melanie told me she felt like people saw her as a bee; they seemed to want to swat her away and get her out of their space. It broke my heart.

Then we moved to inclusion and valuing diversity. I think it is improving. Once people connect with Melanie they enjoy her company. It takes a little extra effort to connect is all! Well worth it. We have lived through it all!

Because of these life-experiences, I expected to be exploring familiar territory in February 2018 when my husband Robert, our daughter

Melanie and I attended an Inclusive Leadership Adventure Weekend on Vancouver Island BC, Canada hosted by an organization called the Inclusive Leadership Cooperative (ILC). However, I was also prepared to be disappointed. We have often felt that so many efforts to be inclusive and welcoming, even though well intentioned, might be missing the mark. Over the years Melanie has felt excluded in various situations that were described as inclusive. 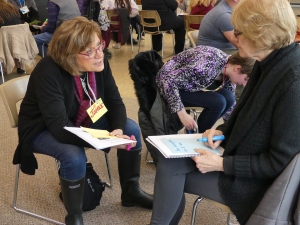 It turns out that I enjoyed this weekend Inclusive Leadership Adventure so much that I feel inspired to take action to promote inclusion in a broader way. We felt important and included right from the start, from the minute our car pulled into the parking lot. The weekend was co-facilitated by a diverse team of already trained Inclusive Leaders. One of these Inclusive Leaders came to welcome us and offered to help and direct us as to how to get registered and find our rooms. Other

techniques the ILC used that promoted inclusion were a thorough orientation. We were given a program/schedule. We were told the physical layout of the venues and the rules/guidelines. I thought to myself, “Here is a group of people who know – just like I know – how important it is to understand what is expected in new environments.” It is stressful to not know what is going to happen and what behaviors are expected. Welcoming committees are an important part of building inclusive and welcoming communities.

Although such a big deal was made out of allowing Melanie to attend regular school there was no welcoming committee. The deinstitutionalization of persons with mental illnesses and developmental disabilities was in process across Canada and some other parts of the world when Melanie was born. In 1985, she was the first student with multiple disabilities to go to regular public school in a typical classroom in Victoria, BC Canada. It seemed like we should be grateful that our daughter was allowed to attend. As you can see in this picture; she even received a special award in 1989 at BC Government House for being special enough and brave enough to go to school. Melanie was hugely labeled as ‘special’. Labeling someone “special” is not inclusive. We are all special. At the time my husband and I felt guilty that we rejected the “special” label. We swallowed the pain of what felt like patronization. We didn’t want Melanie to be ‘special.’ We wanted her to be included which is to feel important, respected and valued. 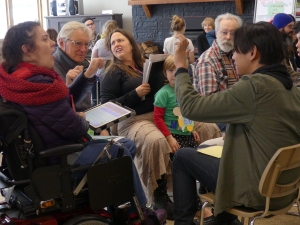 During the Inclusive Leadership Adventure we learned that many people feel excluded in mainstream settings. It is important to keep that in mind when building communities where everyone belongs as equals. An experiential approach was used to facilitate learning. I, like other human beings learn through emotional experience/process. When I feel it, I remember it.  I could feel the positive

emotion and increased participation as people were feeling the inclusive atmosphere. We talked a lot about how to behave in ways that promote inclusion for all human beings regardless of age, ethnicity, gender, sexual preference, physical/mental ability, health status etc. Many participants shared that they feel comfortable and included when others notice /welcome them, listen, empathize, respect, accept, encourage, value and support. All of the exercises and activities during the weekend focused on practicing these skills. We practiced the skills we were learning with each other and outdoors in nature. We learned that the environment (plants/ animals) have value and importance when considering how to create an inclusive world.

Sometimes to remind myself what inclusion is. I describe what it is not. I am 68 years old now, and some of my most painful memories and poor performance are related to times when I felt “left out.” Excluded. Rejected. It felt terrible when I didn’t fit in with the group, community or workplace. People didn’t look at me. I was criticized and judged as being “not good enough.” I felt discouraged. My unique learning style was ignored. I wasn’t given time to practice what I was being taught. I had no control or autonomy. No one took time to ask me what I needed or how I felt. My opinion was never considered.

There are many everyday examples of exclusion. If the doctor’s office is not sharing why they are running late and how long it might take I feel unimportant. If the airport doesn’t explain why the flight is delayed, I feel like I don’t matter. When we pollute and avoid recycling garbage we are telling the environment that it isn’t important. If I feel excluded and undervalued, my hands shake and my mind goes blank. Sometimes, I retreat with a sick feeling in my gut. Other times, I get angry and lash out. Very few good things happen. I make more mistakes. It hurts.

Behind exclusion is aggression. Behind aggression are feelings of hurt, helplessness and fear. Chances are an aggressive person is not feeling included. In non-inclusive environments, I hear people being labeled as “behavior problems.” Sometimes people act out when they have difficulty communicating in the common verbal ways. 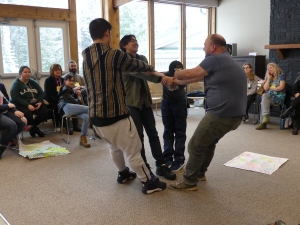 To help stop aggression we Inclusive Leaders must have the skills to allow people who are doing aggressive behaviors (acting out) to identify these feelings and acknowledge them. Behavior is communication. In many cases the causes of these feelings can be remedied by identifying/recognizing them, acknowledging, empathizing, making adjustments/amends and reconciling. Inclusive leaders look behind behavior to identify unique learning /communication needs. We accept and welcome alternate, augmentative communication styles and other languages.

Inclusion makes me feel like I belong. I feel valued and heard. It feels safe to ask for what I need. My human differences are accommodated and understood. Accepted. My creativity and best performance comes forth.

I enjoyed this weekend and left inspired to take action to promote inclusion in a broader way. I plan on checking to see if the persons in my presence feel important. Also, I am going to acknowledge nature in more ways. I plan to set an example by doing what I learned to do at this Inclusive Leadership training weekend.

Inclusion is contagious. There is a ripple effect. A few inclusive leaders can change the tone and improve quality of life in their families, community, workplaces and beyond.