Co-Founder of the Inclusive Leadership Co-operative – Glaucia DesRochers – is taking centre stage in the Cowichan Valley this week with a courageous, creative and musical feat of

Ethical Witnessing. Glaucia stunningly channels legendary jazz singer Billie Holiday in the musical “Lady Day: at Emerson’s Bar and Grill.” All three shows this past weekend were sold out. Inclusive Leaders living on Vancouver Island are encouraged to act quickly if you are planning to see this show on December 4, 5, and 6 in Chemainus and Crofton, Vancouver Island. Tickets are available at: Chemainus Foods, Chemainus Gardens, Crofton Pub, Baan-Do’s Stir Fry, Duncan or Cardino Shoes, Duncan. Read on to learn a little about how the play “Lady Day” and Glaucia’s performance is such a brilliant example of the Inclusive Leadership skill of Ethical Witnessing (Linda Hill is the author of this post). 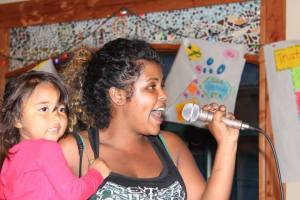 Ethical witnessing is a skill for responding to systemic discrimination that Glaucia and other Inclusive Leaders have learned from Dr. Ishu Ishyama’s Anti-Racism Response Training. Ethical Witnessing is based on the knowledge that it is never too late to take responsible social action to challenge and try to change systemic discrimination. Effective ethical witnessing involves gathering information about a situation of discrimination and then developing a public response that builds awareness, educates and calls people to action.

In my opinion, dramatist Lanie Robertson’s decision to write his Lady-Day musical as a lament honouring Billie Holiday as a human-rights activist is an extraordinary Ethical Witnessing response. Every word of his one-woman play and every song speaks out about how Holiday used her voice and other “secret weapons” to stand up and do whatever she could do assert her equality in the face of daily oppression carried out by white people against black people. Every person sitting around the cabaret tables in the audience is invited to do what Glaucia has done – step into Holiday’s shoes and learn how she drew upon her gifts of music and humour to survive and triumph during her often-harrowing life’s journey. Her raw stories such as what she did when she was denied access to a washroom are tales filled with “piss and vinegar.” Songs such as the anti-lynching song, “Strange Fruit”, express her anguish and fury at systemic white privilege and systemic devaluing of people of colour that impacted every interaction in her daily life.

Glaucia says, “Billie Holiday embodies a woman who was not a victim but a woman of strength and resilience. Billie overcame so much to become the jazz legend we know today. I feel humbled and honoured to be in this role.”

As I experienced Glaucia’s transformation into Billie within this play set in 1959 during the last few months of Holiday’s life, I had plenty of opportunity to reflect on the history of racism, the history of the American Civil Rights Movement and the relevance of Holiday’s life to what is happening in 2015. Here are some of the questions I am asking myself:

Glaucia is a gifted award-winning Cowichan Valley vocalist who became involved in Inclusive Leadership in 2003 at the age of seventeen. “I was adopted from an orphanage in Brazil and was the first black person in my small community on Vancouver Island. It was scary. When I was seventeen I got involved in Inclusive Leadership and learned how to accept and how to offer my differences as gifts.” Since that time Glaucia has become a skilled Inclusive Leader who offers her musical gifts throughout her community to bring together people from diverse backgrounds to learn how to build loving, peaceful, and joyful relationships. Lady Day is another powerful opportunity for Glaucia sing out for fairness and has been an incredible opportunity for her to discover her gift for acting as well as singing. She is simply stunning.

Inclusive Leaders from all walks of life are invited to bring your diverse gifts to experiential education in “Facilitating and Mentoring Inclusive Leadership” February 19, 20, and 21, 2016. Join us in our fourteenth year of gathering together new and experienced Inclusive Leaders who are passionate about social diversity and biodiversity. When you participate in our intercultural, inter-generational, experiential education for changing the world from the inside out, you will develop your own skills, awareness, and action plans for:

We all have a vital role to play in transforming communities by embracing diversity.