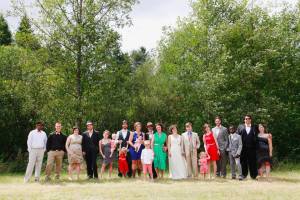 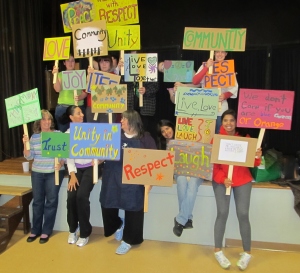 Moses, Liean and their fellow MLGers describe themselves as: “Leaders from younger and older generations and many different cultures. We include everyone, help others and make sure no one gets left behind or left out.”

The Gilberts are very concerned about what happens to children who get left behind when adoptive parents change their minds. This issue is explored in the Fifth Estate documentary: A Boy Named Moses (aired November, 2014). Cathy says, “Over the twenty-five plus years that I’ve been connected to adoption I’ve come across over twenty kids (without even stopping to think too hard) who were re-homed, disrupted, abandoned – one way or another – passed from one adoptive parent to another or passed back into the system. This show was for all of them. If the show helps prevent this happening to even one child….”

Moses says, “It’s sad when people do things that are not right to other people, especially when they can’t do anything about it. It’s kind of scary a lot of the time. I was scared I wouldn’t have a family”

Click here to watch this 40 minute Fifth Estate episode. Read on for an essay by Linda Hill and Cathy Gilbert about how going public with Moses’s story is a courageous example of the Anti-Discrimination First Aid skill of Ethical Witnessing. 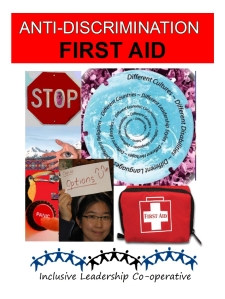 By developing Anti-Discrimination First Aid skills, Inclusive Leaders can respond effectively instead of standing by helplessly when there are situations of mistreatment, bullying, exclusion, exploitation and other forms of discrimination.

However, simple as it is to list these skills, Anti-Discrimination First Aid skills are perhaps the most challenging of all Inclusive Leadership skills to stand up and do. More often than not, Inclusive Leaders find ourselves being first responders to hurtful situations that are occurring within a larger context of systemic discrimination that has been occurring against an entire identity group for a long period of time. In other words, when we step forward to offer to help, we are seldom responding to an isolated incident. Instead, the specific incident of discrimination we are responding to is usually one more hurtful act being added on top of an accumulation of hurtful acts being played out within systems that condone and perpetuate discrimination against a group of people. People who are commonly targeted for discrimination tend to be people who are visibly different in race (not white), ability (almost any disability), sexual and gender orientation (not heterosexual), age (not an adult) and on and on.

The Fifth Estate story of A Boy Named Moses is a story about a child who is a member of several groups that are commonly targeted for discrimination. He is a child. He is an international adoptee. He  has been a child in care. He is Black. Before the age of 5 he experienced unfairness, mistreatment, exclusion, rejection, and abandonment – over and over again.

Enter Cathy and David Gilbert: People who live a life of exploring, sharing, and celebrating their own differences and the magnificent diversity of all living beings in our incredible world. They are people who treasure the many ways Moses and all their biological and adopted children have enriched their lives. They are people who know that compassion is the opposite of pity, unconditional love is the opposite of living up to expectations and that family is forever.

They also know through some very difficult advocacy experiences, that their efforts to stand up for their children are acts of courage. This is partly because whenever they are standing up for any one of their sixteen kids, they are standing up for all kids who have experienced that particular form of discrimination. This is also because taking action to assert their children’s rights, communicate their concerns, go public as ethical witnesses and by forming a circle of support around their children, they put themselves on the firing line.

Cathy says, “In our lives to date we have experienced love and support as well as criticism and rejection. That’s life I guess. It’s amazing how people can be your friends until your kids have difficulties, or you stand up to processes and policies that don’t make sense or run counter to what is in the best interests of people. Then all of a sudden you can go from being wonderful to someone people wish would move away from them, literally and figuratively.

It seems the stars have aligned to bring us to the Cowichan community and the Inclusive Leadership community. I hope to deepen these connections with other caring individuals who share our compassion for others.”